15 Fashion Trends from around the World

On Friday the 20th of April, the fashion society of the University of York is presenting an International Fashion Show in collaboration with Leeds Fashion Society and York Fashion week in the beautiful Carluccio’s. For this occasion we decided to explore the wide world of fashion to see where the classic clothing items everyone knows really come from. Some of them might surprise you!

London, UK
Mary Quant is responsible for the risqué raising of hemlines in the late 1950s. Very short skirts were also worn years ago, during the Roman times or within the Miao people of China during the Quing Dinasty (1644-1912). But it was Quant who put them on the high street and named the design after her favourite car, the Mini. Image: www.pinterest.com

Munich, Germany
This renowned icon of rebellion was, like most great inventions, created purely for practical purposes. It was a foot injury on a skiing trip that prompted Munich-based Dr Maertens to develop a comfortable air-cushioned sole. In the 1950, UK-based shoemaker Bill Griggs spotted the boots in a magazine and decided to anglicise the name to Dr. Martens and remarket them. Style-conscious punks were more than happy to don footwear that resembled the humble working man and when The Who guitarist Pete Townshend claimed to go to bed on tour with two things: ‘A cognac and a Dr. Martens boot’, a youth subculture was born. Image: Thanks to stylesalvage.blogspot.com.

Pennsylvania, USA
Funny how in an attempt to wear simple and wonderfully unspectacular clothes, the Amish became trendsetters. You can spot them a mile off! John Lennon wore an Amish-style and even Dior Homme dabbled with the look for its A/W 2011 show.  Image: Thanks to thephilosophyoffashion.blogspot.com.

Byron Bay, Australia
Artisanal sheepskin boots were known in rural Australia during the twenties. They became famous amongst surfers in the 1970s. When movie theaters banned Ugg boots and ripped jeans, the footwear became popular in the youth market as a sign of rebellion. It was only when Australian Brian Smith lugged a small load of the boots to California in 1978 that they really started to take off globally.  Image: fashionfist.com

These brimmed hats made of plaited leaves from the toquilla straw plant are woven. Surprisingly, they are not from Panama but from Ecuador; they were first shipped to the Isthmus of Panama. Many products have been named after their point of international sale as opposed to their place of domestic origin. Image: Thanks to stylemann.com

Nimes, France
It was the French town of Nîmes (get it, de Nîmes) that began producing the fabric. But it was Levi Strauss who sold the hard-wearing jeans to mining communities in California in the 1850s who, along with Jacob Davis, patented the use of copper rivets to reinforce pocket openings. A more recent trend that gives the fabric a worn effect is created by sandblasting. More than 5,000 workers in the textile industry in Turkey have caught silicosis and 46 have died as a result of the sandblasting technique. Image: blogpot.com

Hawaii
It was Chinese-born Ellery Chun who, in his Waikiki store, began sewing together leftover pieces of kimono for tourists in the 1930s. Servicemen returning from Asia and the Pacific Islands after World War II were wearing the bright patterned shirts and soon after in the 1950s tourism to Hawaii soared. Locals prefer muted colours and the pattern is traditionally printed on the interior which gives the impression the shirt is being worn inside out. Image: hypebeast.com

Canada
Moccasins were traditionally made from a single piece of deerskin or soft leather and stitched at the top. The word moccasin is one of just over 500 words recorded from the extinct Powhatan language. The leaf-covered forest territory occupied by Indians in the east meant they wore soft-soled moccasins while Plain Indians walking on rock and cacti wore hard soles. Image: Thanks to wheretoget.it . 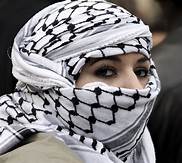 Palestine
This headdress, commonly worn by Arab men, helps protect the eyes and mouth. It became a symbol of the Palestine resistance movement back in the 1960s and was picked up as a fashion trend back in 2000. When China began producing the scarves for as little as €3, Hirbawi Textiles became the last Palestinian factory to produce the traditional keffiyeh scarf.  Image: Thanks tasmim.org!

USA
Designed specifically for pilots by Ray-Ban in 1936, the sunglasses were made available to the public within a year. Michael Jackson, Paul MacCartney and Ringo Star have all sported a pair. But Tom Cruise was the real deal clincher when sales of the brand rose by 40% within just seven months of the film Top Gun being released. Such a dreamboat! Image: Thanks sassyuptownchic.blogspot.com.

Paris, France
A famous mosaic of “bikini girls” exercising was discovered in Sicily and is believed to date back to the 4 AD. But it was in Paris in 1946 that cheeky Monsieur Louis Réard engineered – he was after all, an engineer – the bikini as we know it today. The two-piece bathing suit was so explosive, Réard named it after the Pacific island of Bikini Atoll; a site used for nuclear weapons testing that same year. This photo was posted on theselvedgedyard.wordpress.com.

Russia
Where to begin, oh where to begin? Well, the Russian Bolsheviks were wearing these tanned hides in the early 1900s. Brown bomber jackets were favoured by aviators, especially when lined with sheepskin for added warmth in the cold high altitude climates. But it was Hollywood stars and heartthrobs Jimmy Stewart, Gary Cooper, Marlon Brando and Harrison Ford who really set hearts racing in them! Image: Thanks culturepop.com.

England
A relative of the Hessian boot, the first Duke of Wellington instructed his shoemaker in London to modify the boot and make it sturdy for battle but comfortable for eveningwear. Wellington is one of two British Prime Ministers to name an item of clothing after themselves. The other is Anthony Eden and his Homburg hat. It was only in 1852 that the boots were manufactured in rubber. Given that 95% of the population worked in fields, a water-proof welly was an immediate hit! 1,185,036 pairs were made by the North British Rubber company (now Hunter Boot Ltd) to meet the British Army’s demands in World War I. Today they are a music festival staple! Image: theclotheswhisperer.com.

India
Also worn in and around Bangladesh, Nepal, Pakistan, Sri Lanka and Malaysia, the earliest known depiction of the ‘strip of cloth’ being worn in this way is the statue of an Indus Valle priest. The midriff is sometimes bare in a sari/saree since the navel is considered the source of life. Other cultures deemed this a taboo. Image: mariageisfashion.blogpost.com

If you want to see more fashion from the world while supporting hardworking students and raising money for a charity then don’t hesitate to buy tickets for the International Fashion Show! All proceeds go to Beat, a charity supporting sufferers of eating disorders. Buy your tickets Here.

Is the Display Case the New Sarcophagus? A Look into the Display of Human Remains in Museums