‘What Went Down’ for Foals tonight at the First Direct Arena?

As it turned out, quite a lot.

Immediately as the lights go down, strange black holes crop up in the standing area. The densely packed in indie kids seem to find space that isn’t even there. Their only goal tonight is to give it all and stretch the walls of the First Direct Arena as wide as Kanye’s overdraft. Luckily the Oxford quintet provide a gnarly set to facilitate such teenage urges…

The set begins with ‘What Went Down’ favourite Snake Oil. Here frontman Yannis Philippakis’ riffage combines with Jack Bevan’s bullet drums, it results in the teenage teenage hipsters dancing and orbiting around such holes. The chorus results in a culmination of indie euphoria where half naked atoms rapidly collide. This energy seems a consistent theme of the gig ahead. 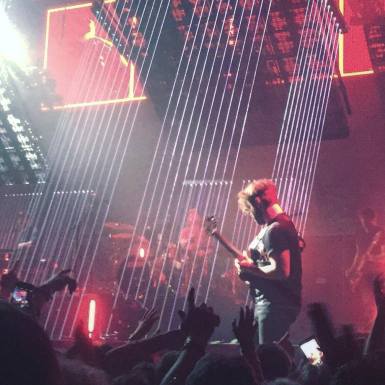 Leeds is the last date of the Oxford dropouts massive arena tour, which has included Wembley Arena. The quintet truly are putting in the revision. After four albums, and the most recent #3 charting ‘What Went Down’, have respectfully gained a cult following. Tonight will be practice for their HEADLINE summer sets at Reading and Leeds Festivals.

The Oxford quintet acknowledge their awkward Oxford drop out origins, emerging through math rock favourites Olympic Airways and Balloons. However, during the Holy Fire anthem Inhaler, Philippakis’ really propels Foals to the next level. Such a level you can already imagine the Reading and Leeds festival organisers sitting in leather director chairs with a cigar rather smug. Inhaler does seem rather apt tonight, allegedly the lyrics were inspired by the denseness of the London tube and the lust for ‘space’. Anyway, the frontman throws himself into the sea of indie kids, showing little regard for his or the front rows’ safety. Its conclusion is Carling showers as the crowd becomes truly possessed. 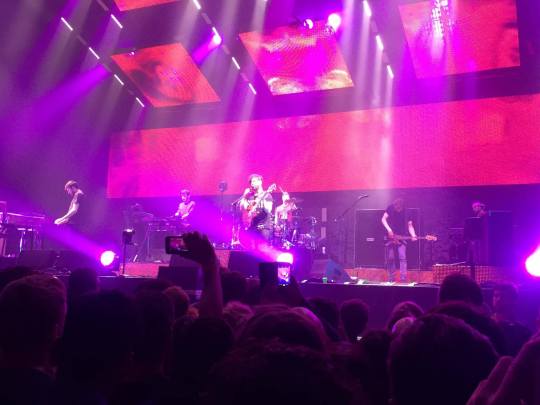 Perhaps the only let down of what went down in Leeds is the over enthusiastic yet unfamiliar teenage audience tonight. Through older material including Red Socks Pugie circles spawn and collide where the song has not quite climbed to its peak and yawns are cured from snide snapchats. But then I suppose the age old notion, as the fans increase, so does the perplexing desire to share with the rest of the world.

Perhaps most frustratingly during Spanish Sahara, the hopeless hipsters decided to sit down during the start of the song, only to stand up thirty seconds later when they finally realised the previous NME song of the year does not reach its chorus drenched climax for at least another four minutes.

The end of the night is capped off with a three song encore. Foals gallop back onto the stage greeted by emphatic Northern cheers. First is London Thunder, an isolated piano riff brandishes Philippakis’ reverb drenched vocals. It’s a spine chilling moment really emphasises underlying vulnerability hidden below their epic riffage. Quite a contrast since What Went Down is next. It’s arguably the most raw and furious moment of night, ending with Philippakis repeatedly hitting the microphone on his chest. A fitting send off.

So yeah, so that’s what went down.

In Review: Where the Crawdads Sing by Delia Owens